Get to Know Analytics

Check the Analytics section of your Dashboard for information on the conversion rate of your actions, number of new and returning supporters, and details on how emails sent through your actions have performed.

Start by clicking on the 'Analytics' tab:

Once you're on the Analytics page you'll see three modules that display different information about your actions:

You can customize the Analytics page by rearranging or minimizing modules.

Emails to Decision Makers and All Email Overview

Both modules show data for emails sent in the previous 30 days, including emails sent in Test Mode. They are updated every 24 hours by our email system, and highlight six metrics: 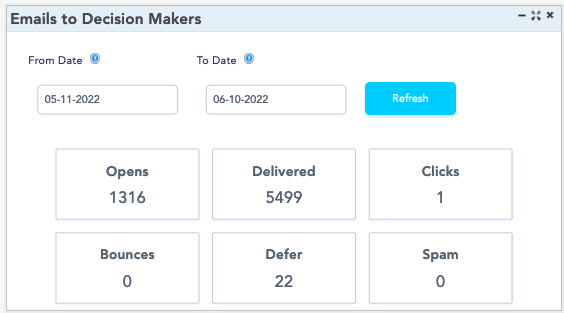 This last module shows conversion rates for each of your actions, displaying the number of page views, the submissions, and the percentage of visitors who took action.

You can also see analytics data for specific actions by checking the Analysis section on the Submissions tab of the action, as described in our Get to Know the Submissions Tab guide.